If you live or work in or around Atlanta, you have undoubtedly seen uncovered holes like the one below. Far too often, the City of Atlanta workers will not cover make the necessary repairs on these hazards, even after being  repeatedly notified of the dangerous condition (Full disclosure: the picture below is from DeKalb County and was in the section of the AJC entitled “What’s not working around Metro Atlanta”).

My firm recently tried a case in DeKalb County against the City of Decatur for a serious injury that was caused by the failure of the City of Decatur to properly maintain and repair its sidewalks. The fall occurred right outside the courthouse square. During the trial, my partners were able to establish that the City of Decatur did not proactively inspect and fix it sidewalks, but apparently just waited until someone reported an unsafe sidewalk condition (or, as in the lawsuit, was injured) before they would make repairs. The jury sided with our client and awarded an almost $200,000 verdict against the City.

Many people (and even some lawyers believe it or not) mistakenly believe that governmental entities are not subject to lawsuits because they are entitled to the legal protection afforded by the theory of governmental immunity. This is simply not true, although many responses to demand letter that we have sent to City and County attorneys have initially taken this position. (This is a position that counties and cities take in response to many attorney demand letters in the hopes that this will end the matter. Trust me, if you hire our firm, it won’t). However, there are additional notice requirements and steps that must be taken against governmental entities in order to preserve your lawsuit against them. These notice requirement are strictly enforced in all respects. If you have been injured and suspect a governmental entity is liable for you injuries, you should discuss your situation right away with an experienced attorney who is familiar with these requirements. This is one type of lawsuit where time really is of the essence, because of the anti-litem notice is not sent in time (or is defective for any other reason such as not properly listing the amount sued for, sent to the wrong person, or not specific enough in its notice), your right to sue will be lost forever. 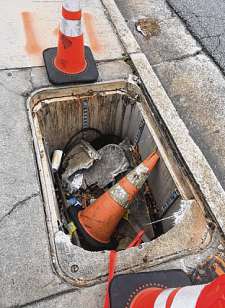 Robert J. Fleming has been handling wrongful death cases, lawsuits against the City of Atlanta, DeKalb County, Fulton County and other municipalities, bus accidents, car accident cases and premises injury cases for individuals and families who have been harmed, injured or died as a result of negligence for over 20 years. He practices in and around the Atlanta, Georgia area including handling lawsuits in Fulton, DeKalb, Clayton, Gwinnett, Cobb and other counties and nearby cities such as Alpharetta, Chamblee, College Park, Conyers, Duluth, Decatur, Doraville, Hapeville, Johns Creek, Jonesboro, Lawrenceville, Norcross, Peachtree City, Riverdale, Roswell, Sandy Springs, Stone Mountain, and Smyrna. If you have been seriously injured because of an unsafe condition and would like to discuss your case in complete confidence, contact Robert J. Fleming directly on (404) 525-5150 or contact us online. We are actively taking cases against these governmental entities.