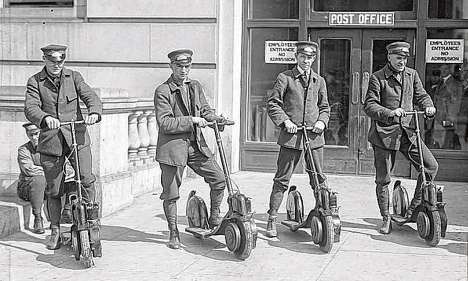 That’s right. You thought all along that Bird, Lime and Uber were the first scooters to show up along the streets of downtown Atlanta. Not so. Electric (and gas) scooters were used by the Atlanta Police Department since at least 1916, although it is apparent that they have not used them in quite a while. So let’s get this straight, the Atlanta police department was using electric scooters in downtown Atlanta over a 100 year before Bird and Lime scooters showed up. An amazing fact, to say the least.

In 1916, these electric scooters were not considered a nuisance and they did not wind up being left on the side of roads and sidewalk, like we see today. The reason: probably because the initial Atlanta scooter were police department property and had to be signed in an out of the police motor pool. In other words, accountability played a role in making sure that the scooters were safely placed in storage when not in use. Of course, there was no also a rash of electric scooter related accidents in Atlanta when these scooters went into service in 1916. Probably because the officers received training on the use of the scooters and the scooter were maintained properly by the police department.

According to the AJC, a 1916 front-page report describes the “sensational” first sightings of a new fad: the Autoped, which the reporter describes as a “man-toting, animated lawn mower.” Autoped motor scooters were made from 1915-19 by the Autoped Co. based in Long Island City, N.Y. (a German company made them for two years after that). The gas-powered version was more popular, but the company also made a version powered by a battery. In its heyday, postal carriers and traffic cops used the vehicles in some cities.
The Atlanta Constitution article describes first encounters with the scooter: “About the first that natives of these parts knew of the presence of this snorting, smoke-emitting roller skate was when G.C. Dugas, of the Packard agency, owner of the mechanical brute, Friday sailed like a young cyclone into the Ansley hotel lobby, fetched up at the cigar counter, bought a stogie and sputtered out again before anybody had time to realize what was happening.” “During the rest of the day folks along Peachtree frequently stopped and considered whether to believe their own eyes as they saw Mr. Dugas steering his strange steed through the labyrinth of traffic.” Quite a remarkable sight over 100 years ago, similar reactions were taking place a couple of years ago when the Bird scooters were appearing out of nowhere and seemingly overnight.

The driver of an Autoped stood on a platform with 10-inch tires and operated the machine using only the handlebars and steering column, pushing them forward to engage the clutch, using a lever on the handlebar to control the throttle, and pulling the handlebars and column back to disengage the clutch and apply the brake. After riding, the steering column would be folded onto the platform to store the scooter more easily. The engine was an air-cooled, 4-stroke, 155 cc engine over the front wheel and the bike came with a headlamp and tail lamp, a Klaxon horn and a toolbox. Developed during wartime and gasoline rationing, it was quite efficient, but was not widely distributed.[2] An electric version was also available with a motor on the front wheel. The Autoped went out of production in the United States in 1921, but was manufactured by Krupp in Germany for a few years after that. From the description, it sounds quite remarkable and I wonder how it would fare today.

In fact, a few year ago, scooters made by the California company, were put into use by the NYPD and used in the subway, public-housing projects, Yankee Stadium and Citi Field — they are a new tool for community policing that consumes far less energy than a car and far fewer oats than a horse. So, you see, electric scooter are not a novelty. What has changed though, is who is riding them and who is getting hurt on them. The shift from police using these scooters to the general public has resulted in myriad of unsafe conditions as untrained customers are hopping on scooters which are simple left on the street in an unknown condition. This combination has led to a host of injuries, many caused by malfunctioning equipment or dangerous conditions caused by inadequate maintenance and repair policies by the scooter companies.

For almost 25 years, Attorney Robert J. Fleming has been handling wrongful death cases, personal injury, and electric scooter related lawsuits for individuals and families who have been injured or died as a result of the negligence of others in and around the Atlanta, Georgia area, including Alpharetta, Brookhaven, Milton, College Park, Duluth, Decatur, Doraville, Hapeville, Johns Creek, Jonesboro, Lawrenceville, Norcross, Peachtree City, Riverdale, Roswell, Sandy Springs, Stone Mountain, and Smyrna. If you or someone you know has been seriously injured or died as a result of an electric scooter accident and would like quality legal representation or if you would just like to consult about a potential case, contact Robert J. Fleming directly on (404) 525-5150 or contact us online.